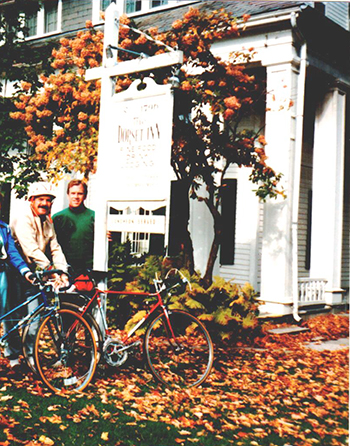 The concept for GolfBikeBag and the dream of an East Coast ride and golf journey originated 30+ years ago . The idea festered for years until 2012 when designs for the original prototype were developed and GolfBikeBag started to breath. Several prototypes and design changes later it was ready to hit the road.  Departing Caribou Me July 2014 in the midst of a scorching heat wave the dream became a reality….pedal 40 +/- miles in the morning , play a round golf in the afternoon….hydrate and repeat.

In the late 1970’s my father and I took a weekend bike ride with the Vermont Bike Touring. It was an introduction to bike touring . I fell in love with the sport and annual  long rides became a summer ritual (Pan Mass Challenges, MS Rides, The Big Ride Across America, Bike Ride Across Georgia, Bike Virginia, North Carolina Mountains to the Coast, NC Coastal Ride, The Vermont Challenge,  Wisconsin River Ride , and many others too numerous to mention). Dad and I stopped for a break on that early Vermont ride along a beautiful little country road outside of Dorset, Vt. We sat on a stone wall next to a golf course and watched a few foursomes come through. Dad had taught me to caddy, old school golf etiquette and  the basics of a golf swing. We were golf diehards and biking was about to become a part of my life. This was a eureka moment. On the ride home our conversation settled around “how do we design a golf bag that can mount on a bike and carry a few days worth of clothing ” Thirty odd years passed raising a family and building a business before I was able to carve out some time in spring of 2012 to begin developing the bag. It took couple years of trial and error and a hand full of prototypes to make GolfBikeBag a reality.

Join me on  a leisurely journey along the back roads of the East Coast as I work my way south pedaling 40-50 miles in the morning and beating the little ball around in the afternoon. Follow on the blog, hop in for a ride or set us up with a time tee at your course. -Chic Godfrey

Dwight Johnson at the Bikeway in Marshfield, MA doing the final safety check. Dwight has been the go-to bike man in our area for over 30 years. He is a bike genius and a great guy.Thanks Dwight for all your help putting this day together.