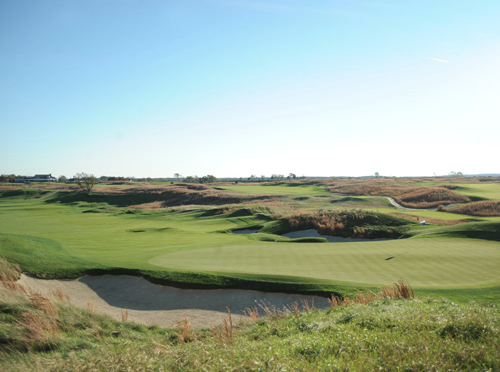 Atlantic opened in the Spring of 1992 and was named by Golf Digest “Best New Private Course” The course Rees Jones built at Atlantic can best be described as “links-like.” Most of the holes are framed by a stunning array of knobs, mounds and moguls that look as if they had been crafted over time by the hands of nature. The land rises and falls, rolls and ripples like the swells at sea, with tall fescue rough swaying and shimmering in the ever constant breezes and ever-changing lighting. Moguls to accentuate the target, and for the most part feature subtle rolls, rather than bold contours frame the greens. Large bunkers that take away half the entrance create a “dogleg” effect on the approach to most holes generally protect greens. But Jones, among the fairest of the strategic architects, has also carefully crafted alternate routes to the flag and leaves the decision of how to play the holes to the golfer. While the course has nary a water hazard to speak of, it does have wind. An ever-present whistling breeze that can kick up and change direction – in a heartbeat, which ultimately demands that a player have a full repertoire of shots to call on. 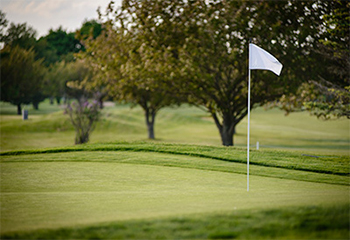 Island’s End is a semi-private 18 hole facility located in the heart of Wine Country on the North Fork of Long Island. Just minutes from the beautiful downtown village of Greenport. At 6,700 yards with 4 selections of tee  The par 3 16th is the signature hole overlooking Long Island sound. 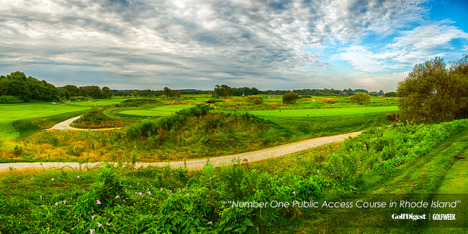 Newport National began life in the early 19th century as a 200 acre landscape nursery with rolling fields and several varieties of native New England hardwood trees. Architect Arthur Hills did a magnificent job retaining all the natural beauty including mile upon mile of pristine stone walls. Overlooking the Sakonnet Passage and the Atlantic Ocean in the distance, this link style course is reminiscent of the great  courses of Ireland and Scotland. Always ranked as one of the top public courses in the country, Newport National at 7244 yards from the tips with the wind howling from Narragansett Bay bought us to our knees on this beautiful Sunday afternoon with wind gusting to 40 mph.

On May 21, 1898, a group of eleven men and women met at a Woburn Street residence to discuss the possibility of forming a club and within four days the group found a suitable location for golf links; a pasture owned by Asa Parker off Franklin St. in Reading.  On June 1, 1898, Meadow Brook Golf Club was formally organized and by that summer, the organizing group laid out a golf course and were playing golf. There were 30 members by the end of the year.

From this modest beginning Meadowbrook has evolved into a family oriented private club offering a full palate of activities including, golf, swim and tennis; all managed by an unparalleled professional staff.

Old Marsh Country Club is a semi-private, 18 hole, championship golf course located in Wells, Maine.  The public is welcome! The club was designed by Brian Silva and built in 2008 as an homage to the golden age stylings of C.B. Macdonald and Seth Raynor. In its very first year of operation it was ranked “Top 10 Best in America” by GOLF Magazine.

Highland Green Golf Club features a challenging nine-hole course nestled in a 650-acre expanse of Midcoast Maine. The Scottish-style course is located just off the Coastal Connector in Topsham, Maine and is part of Highland Green, the Northeast’s premier 55+ active lifestyle community. The public is welcome!

The course was built to blend naturally with the beautifully rugged terrain of Midcoast Maine. Rock outcroppings and natural ridgelines have been incorporated into the design to add to the challenge and uniqueness of the course.

Natanis Golf Course, located just outside of Augusta (one hour North of Portland and one hour South of Bangor), is the only golf course in the State of Maine to offer 36 regulation holes. Natanis was cut from the rural fields and rugged woods of Vassalboro, Maine.

Originally established in 1965 as a nine hole course by Paul Browne, it is run by the second and third generations of Brownes and has grown to become one of the most popular public courses in the State. “Golf Digest” ranked Natanis as one of the top 500 public courses in the United States. “Golf Digest” also gave Natanis’ signature nine, Indian Territory, a five star rating, the only holes in the state to receive that distinction. In 2002 Indian Territory was combined with Arrowhead to form an 18 hole layout.

“Penobby” is an 18 hole, championship golf course located in Orono Maine. It was designed by the celebrated Donald Ross and built in 1924. In the 90 years that followed, the club has hosted golfers from Arnold Palmer to “Larry the Cable Guy”… and has established an impressive pedigree of competitive events. Since 1926, no less than ten Maine Amateur Championships have taken place at Penobscot Valley; an 11th Amateur is now scheduled for 2018.